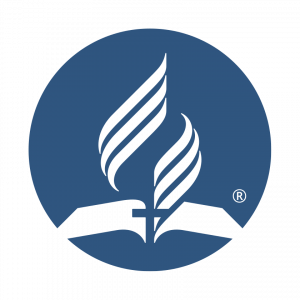 7. Excursions In Accra And Tema

Pay through your conference before registering here. You’ll need your receipt number to complete the registration.

The Southern Ghana Union Conference Women’s Ministries department is a place to address the spiritual, emotional, physical, and social needs of women in the church. Encouraging women to improve their potential for participation in the mission of the church.
It is a support system that mentors and encourages women to become involved in all areas of ministry in their church, their community, and in their home, while strengthening hurting women by providing a forum to help address topics and issues as they affect the woman so that they may find joy in the Lord.

Women empowered and nurtured to fulfill their God-given Potential

The Department of Women’s Ministries exists to uphold, encourage, and challenge Adventist women in their pilgrimage as disciples of Jesus Christ and members of His world church.

Reach Up To God

To elevate women as persons of inestimable worth because they have been created and redeemed and enable women to deepen their faith and experience spiritual growth and renewal, to also, Build networks among women in the world church to encourage bonds of friendship and mutual support and the creative exchange of ideas and information and mentor young Adventist women, encouraging their involvement, and creating paths for them as they reach for their potential in Christ 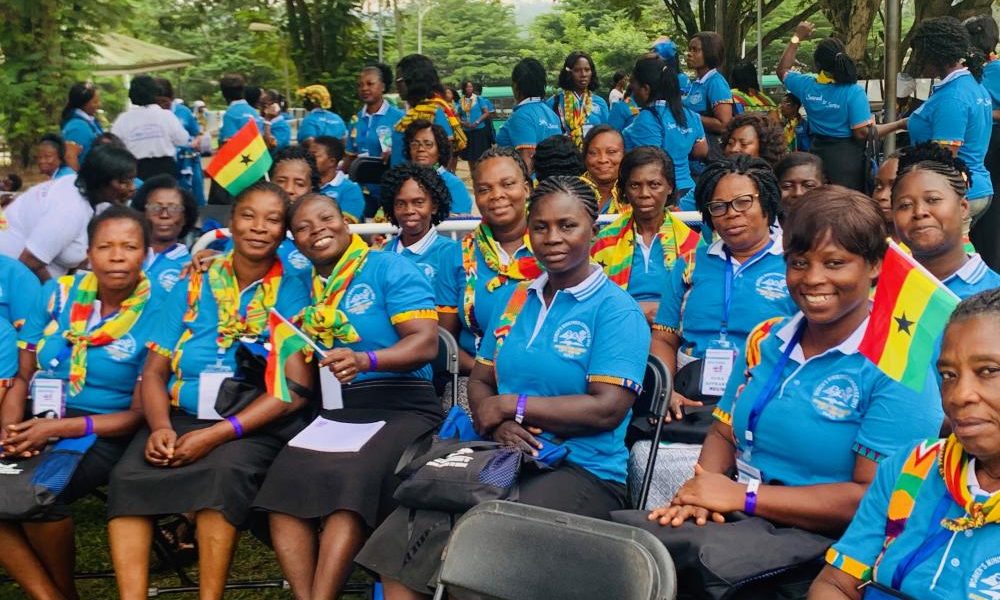 Reach In With God

Challenging each Adventist woman with her potential to complement the gifts given to other women and men as they work side by side to further the global mission of the Seventh-day Adventist Church and bringing women’s unique perspectives to the issues facing the world church. 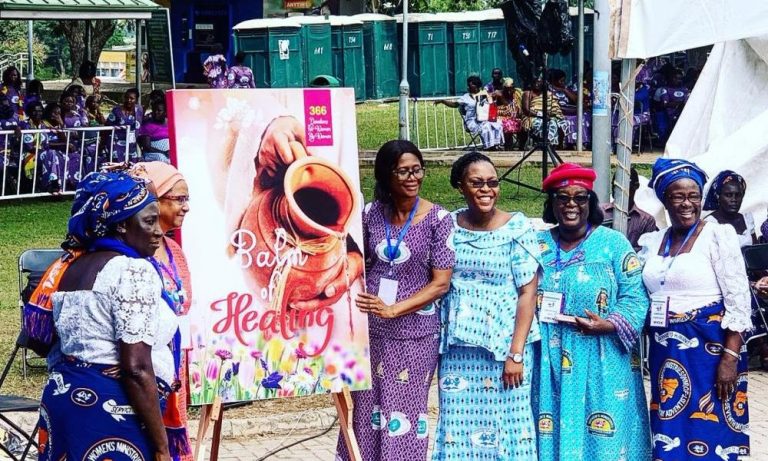 Reach Out With God

Seeking expanding avenues of dynamic Christian service for women, that out of the fullness we as women have personally found in Jesus Christ, we may be empowered to share the good news within our families, among our fellow believers, and in expanding more circles in the unsaved world. 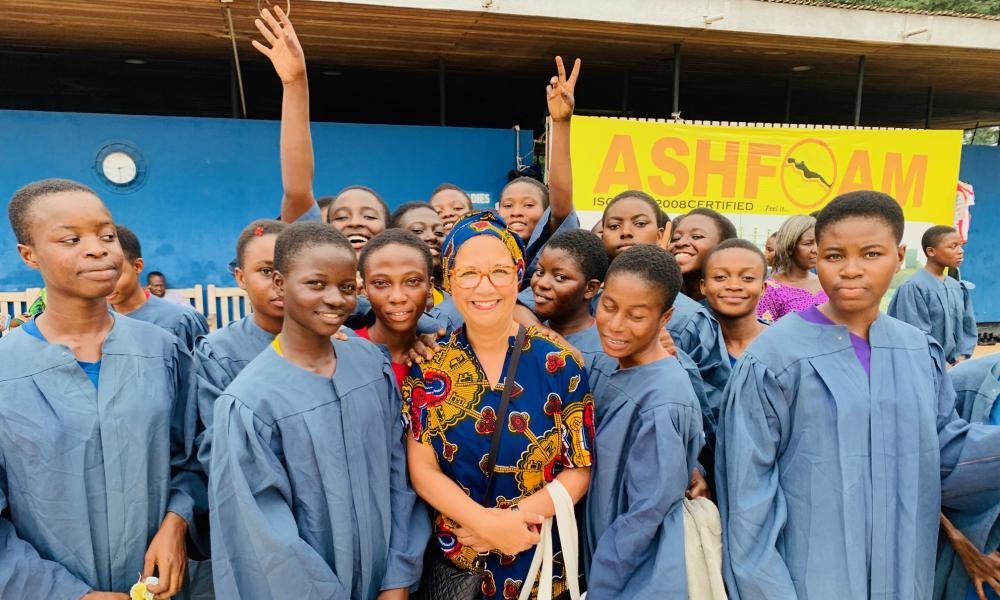 “We greatly need consecrated women who, as messengers of mercy, shall visit the mothers and the children in their homes, and help them in the everyday household duties, if need be, before beginning to talk to them regarding the truth for this time. You will find that by this method you will have souls as the result of your ministry.”—Ellen G. White, Review and Herald, July 12, 1906

“Christ’s method ALONE will give true success in reaching people. The Savior mingled with [people] as one who desired their good. He showed His sympathy for them, ministered to their needs, and won their confidence. THEN He bade them, ‘follow Me’.” —Ellen G. White, Ministry of Healing, p

OUR PLAN: I WILL GO REACH MY WORLD

A call to the women of the Seventh-day Adventist Church by Heather-Dawn Small, worldwide director of Women’s Ministries

I Will Go is a rallying call to every member of the Seventh-day Adventist Church to be part of Total Member Involvement. It is a call to mobilize our resources efficiently and productively, to be flexible, and to answer God’s call to put aside our own plans and move in whatever direction He calls us to go  Women’s Ministries embraces the Seventh-day Adventist Church’s 2020-2025 world theme—I Will Go. We have added to it three words, “Reach My World,” and it becomes, I Will Go Reach My World.

Reaching your world is to touch the heart and the lives of someone in your center of influence, whether it be your own family, friends, neighborhood, or workplace. Reaching your world is to show and tell the world the good news of the Savior. Our Women’s Ministries mission statement emphasizes that we are called to NURTURE our sisters, to EMPOWER them for service, and then to focus all that we have learned on OUTREACH to others.

I WILL GO POINTS TO THE IMPORTANCE OF:

Women in the church and new believers so we can grow in the power of the Holy Spirit.

We are each called, my sisters, first to accept the gift of salvation that God so freely has offered us, then to live each day allowing the love of Christ to flow, reach out and touch and make a difference in our world with that love.

I will go reach my world. What about you?

If we unite in purpose and reach our individual worlds, we will together reach the whole world.

“I heard the voice of the Lord saying whom shall I send and who will go for us? Then said I here am I, send me.” Isaiah 6:8. 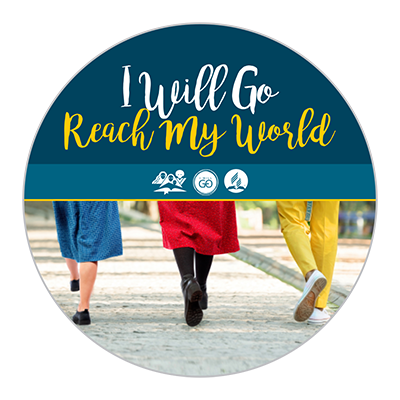 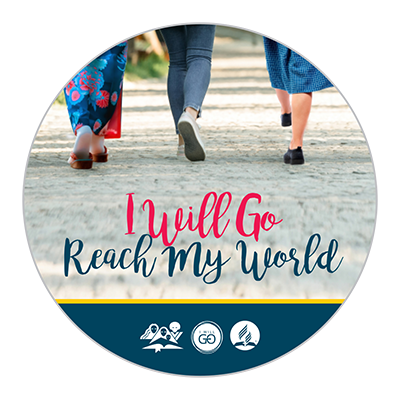 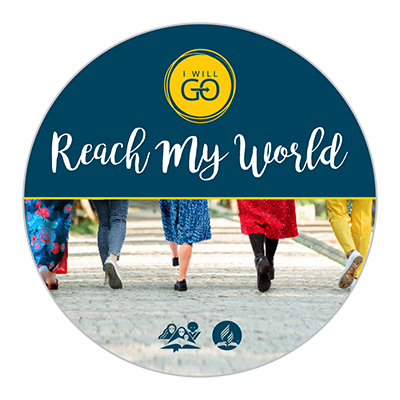 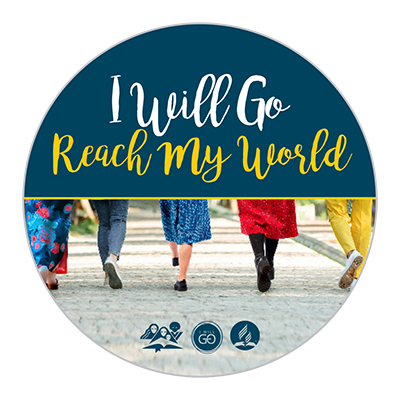 GUIDELINES FOR USING THE LOGO 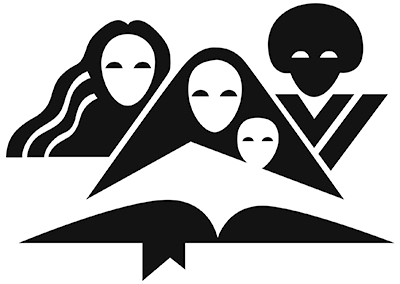 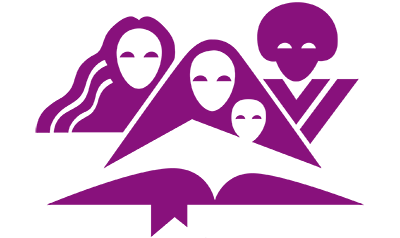 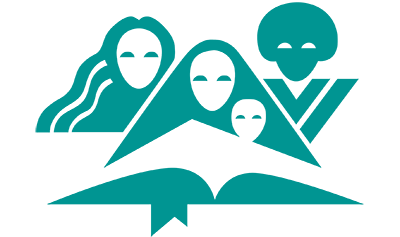 We hope that this information will help you understand our Women’s Ministries logo and its use. Some recent changes have been made to our logo. We also feel that it would be good for you to know a little of the history of our logo and to have guidelines for use so we can maintain the integrity of our logo and ensure that it is easily identifiable by all who come in contact with it.

We appreciate your helping us in implementing the guidelines given and ensuring that we maintain one standard for use of this logo.

HISTORY OF THE WOMEN’S MINISTRIES LOGO

Rose Otis, director of Women’s Ministries, worked with Jeff Dever, of Dever Designs, an award-winning Adventist designer near the General Conference, to come up with such an image. As Women’s Ministries began around the globe, the logo began to become familiar and identified the office (Women’s Ministries did not become a department until 1995).

When it was voted to celebrate 1995 as the “Year of the Adventist Woman,” it was decided that the logo should be adapted to help the Church understand better who and what the Adventist woman is. Again, Jeff Dever, Rose Otis, and this time, Ardis Stenbakken, worked on the project. The logo was not changed, but this time words were added.

The logo appeared in two forms: one with a motto and one without. The motto, “An Affirmation of Women and Mission,” and the logo were widely used; a poster was produced featuring women from all parts of the world and the motto was translated into the appropriate languages to go with the logo.

As the logo continued to be used, it was reproduced on banners, posters, floats, signs and printed materials—sometimes copies of originals, and sometimes copies of copies of copies, and sometimes free hand. The logo took on different features and sizes and shapes. Complaints began to come to the General Conference of Women’s Ministries that some groups of women felt left out, smaller, behind: not as important as the other women. Because the purpose of the logo was to show the equality of women, women working, learning, and growing together, these complaints were taken seriously.

At the second World Advisory, held March 2001, the division directors and the General Conference departmental directors took a sizeable chunk of time to discuss and work on the logo. Ideas were sent back to Jeff Dever for advice and guidance. The women felt that they did not want to lose the idea and identification of the logo, which had by now become well recognized, but they also wanted to do something to meet the needs of all the women. After considerable discussion and drafts, the logo was changed slightly. The idea was voted and accepted and Jeff Dever was asked to finalize the art work and put it on electronic formats so that everyone could have a uniform image.

At the fifth World Advisory, held March 2016, the division directors approved a modification to the logo (the second eye for each of the figures) and the addition of the two Women’s Ministries colors, PMS 320 (turquoise) and PMS 273 (purple), as presented by the General Conference departmental directors. The motto is no longer part of the logo image, but an alternate logo image contains the identifying words, “Women’s Ministries, General Conference of Seventh-day Adventist Church”.

The logo is only to be used to identify the Women’s Ministries Department of the Seventh-day Adventist Church.

It is to be used in its entirety with no parts removed or added, e.g. adding another woman to the logo, is discouraged. It should only be used with the given scale so as not to distort the figures.

While the logo may be enlarged, it should not be reduced to a size beyond recognition or where features are lost.

The logo should be used as produced by this department. A division, union, conference/mission or local church can add their name to the logo. However, when reprinting material from the General Conference, the local field cannot add their own logo or name to this official Women’s Ministries logo of the Seventh-day Adventist Church.

The official color of the logo is black, but the Women’s Ministries Department colors are also used: PMS 320 (turquoise) and PMS 273 (purple). When using any of these colors they should be solid colors. More than one of the official colors cannot be used at the same time in the logo. The two-color graphic with purple logo image and turquoise departmental name is provided and can only be used in this color combination.

It should also be noted that reverse print is allowed when using the logo.

The logo can be used on—

But it can only be used in relation to Women’s Ministries. 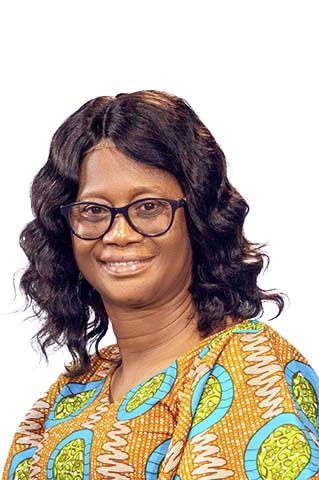 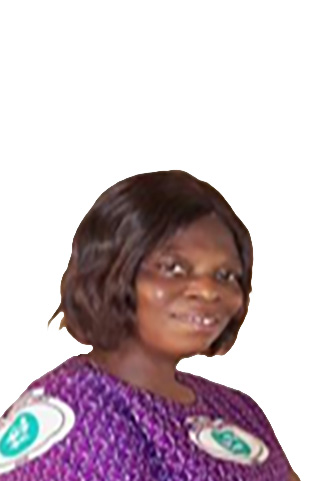 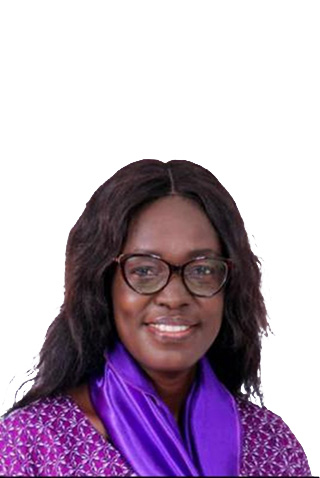 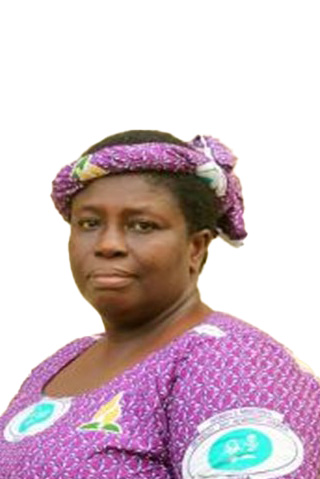 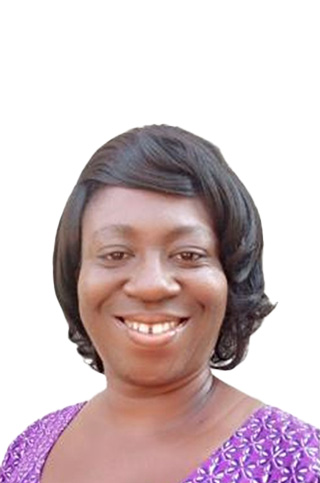 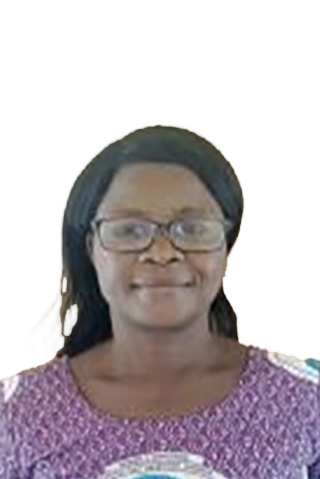 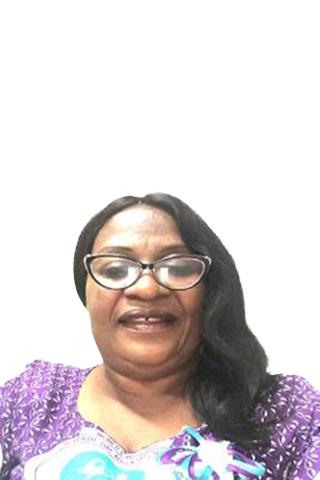 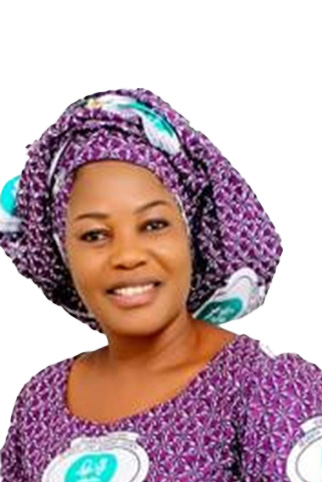 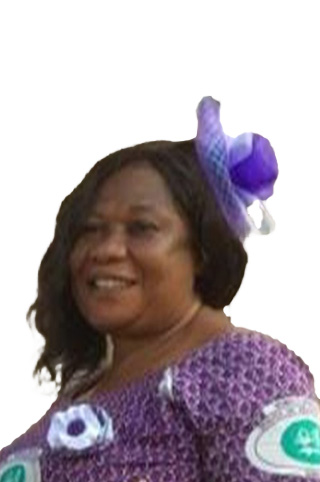 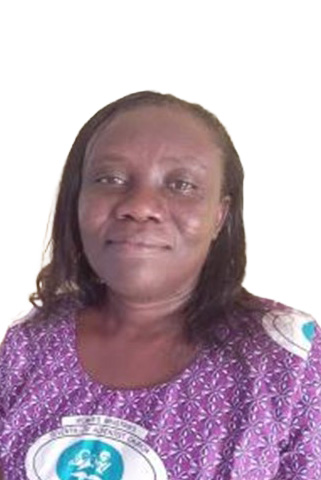 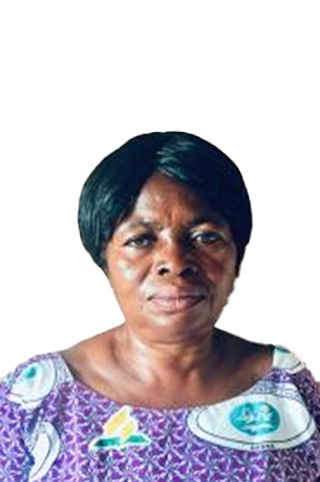 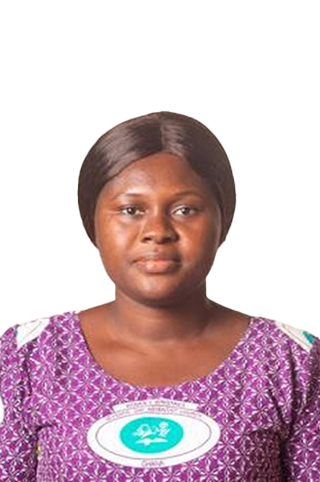